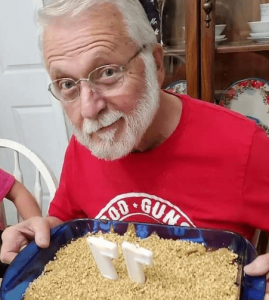 COOKEVILLE, TENNESSEE — An active 77-year-old father and grandfather was warned by his daughter not to get a booster shot. He’s now dead and the daughter is warning others to avoid the boosters.

Mr. James “Jim” Cooper Sawyer received a third Pfizer mRNA “booster shot” on August 20, according to his daughter Leah Flaga. Pfizer booster injections are currently recommended by the Centers for Disease Control (CDC) only for immunocompromised people. Thus it is unclear why or how Mr. Sawyer even got the third injection, as he was described as healthy and vibrant by his family. The CDC reported that one million Americans have received booster shots as of August 31.

Mr. Sawyer immediately started “not feeling right” after the third injection. He text-messaged his daughter that day, asking her if she could help explain the adverse effects he was experiencing. No more information is provided thereafter. Mr. Sawyer passed away “suddenly and unexpectedly” on August 28.

Ms. Flaga said she hopes sharing her father’s story will “cause someone to think twice and do their research before so willingly injecting something so foreign into their body.” 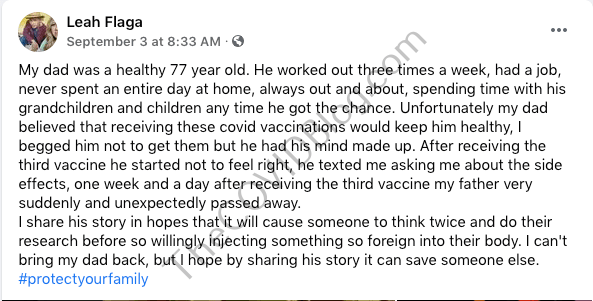