RAMONA, CALIFORNIA — A 33-year-old flight attendant and former beauty pageant contestant is holding out hope that she may walk on her own again. But she’s resigned to her “new life” and trying to stay positive in the face of the impossible.

Ms. Kaitlin Endres received the experimental Johnson & Johnson viral vector DNA injection on June 9, according to her Instagram account. She felt it was “the right thing to do.” She also felt pressure to get the injection because of her jobs in both the airline industry and real estate. Ms. Endres called the injection a “birthday present to herself” since she turned 33 the day before.

Her entire existence and life as she knew it changed forever 12 hours later.

She was at a birthday dinner the next day and told her boyfriend “my legs feel really heavy, like something is squishing me.” But she kept smiling and pretending like nothing was wrong so to not ruin the dinner. Severe pain in her legs turned to excruciating, debilitating pain on her way home. She said it felt like there was a boulder sitting on top of her legs and she couldn’t move them. Ms. Endres lost consciousness as her body shut down from being in so much pain.

The pain continued the next morning so she went to an urgent care facility. She also could not speak normally and a 104 degree fever. Ms. Endres said on the “Level Up with Matt Rogers” podcast that doctors tested her for blood clots. But she did not specify what tests were actually done. Doctors told her she was fine and nothing was wrong with her despite being in excruciating pain. These are “normal” side effects to the experimental injections, according to the doctors. They prescribed Xanax, a drug for anxiety and panic attacks, and sent her home.

Note that the Centers for Disease Control (CDC) and other U.S. “health experts” have long blamed anxiety for all “vaccine” adverse reactions, and not the injections themselves.

Two days later, June 12, Ms. Endres started feeling sharp pains behind her knees and her toes were numb. She went back to the same urgent care and was told to go to the emergency room. ER doctors performed an MRI, which came back “clear.” They decided against testing for Guillain-Barré Syndrome since the MRI showed she was healthy. She was prescribed steroids and sent home again.

Her condition progressively worsened. She could no longer control bladder and bowel functions and was forced to wear adult diapers. Ms. Endres returned to the ER again a few days later. This time they did do a lumbar puncture (spinal tap), along with four more MRIs on her spine. All of it came back “clear.” But now she had the added complication of lumbar headaches and was essentially bedridden for the next two weeks. And that’s when she hit rock bottom.

It was June 29 when she attempted getting out of bed on her own with a walker. It took several minutes and she did accomplished standing up. But she immediately collapsed to the ground, unable to hold herself up. Though doctors told her it was “paresthesia,” she no longer had the ability to stand and walk on her own. Unfortunately she could still feel the sharp pains throughout her legs despite not being able to move them. 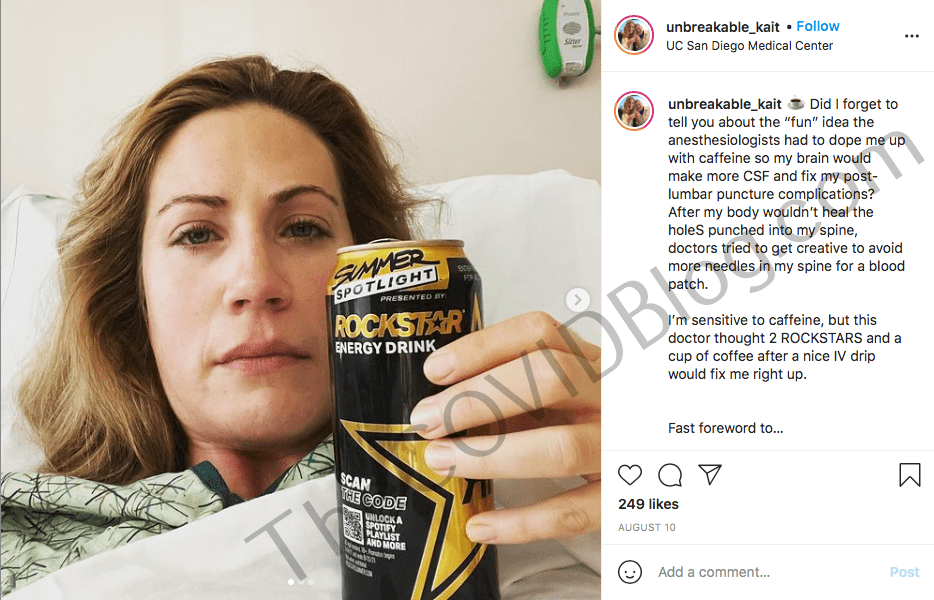 Ms. Endres uses both a wheelchair and walker as she continues trying to regain the ability to walk. If nothing else, she stays very positive despite the grim prognosis. But like every recipient of these lethal injections and the propaganda that convinced her, she’s trying to make sense of this world now. Ms. Endres posted an Instagram update on August 12 about a friend of hers who allegedly died of “COVID-19” despite being fully vaccinated. “I don’t know what to say, I don’t know what to think,” she wrote.

The war is now in full force in Australia, Europe and the United States with Biden’s dictatorial mandates and a well-oiled propaganda machine in mainstream media. This story, like every story on this blog, will be dismissed as “fake” and/or “rare” by the COVID cultists and their leaders.